Get fresh music recommendations delivered to your inbox every Friday.
We've updated our Terms of Use. You can review the changes here.

by Getatchew Mekuria & The Ex & Friends 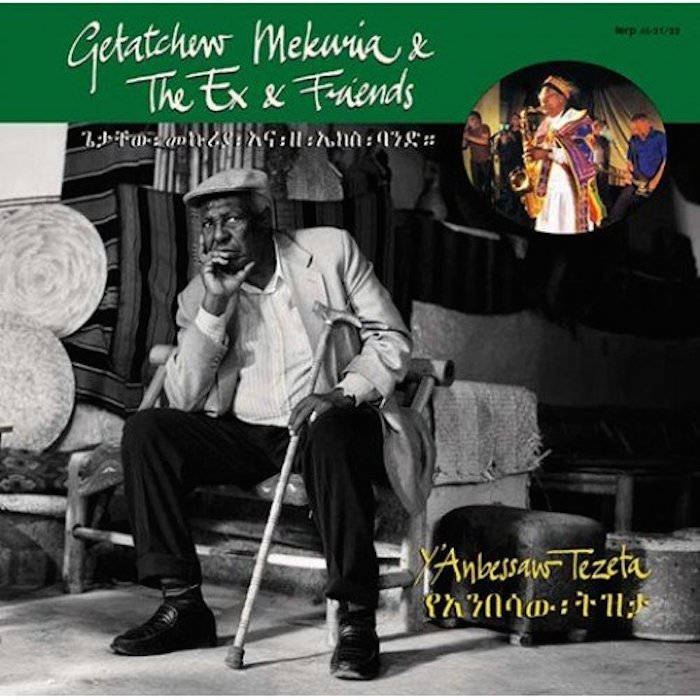 Quite unexpectedly, last year, while here in Europe for several summer festivals, Getatchew Mekuria at the age of 76, expressed an urge to make one more recording. With The Ex. Probably the last one in his life. A great responsibility!
We recorded in December, in Wormerveer and Addis Abeba. The result is stunning. Deep, old, classic melodies. Very different from the last one. Instrumental, more sensitive and fragile, deeper. Amazing horn riffs and solos, but also danceable, with up-tempo war-chants. Many things. He called it “Y'Anbessaw Tezeta” (In Memory Of The Lion). Memories of 65 years of playing music! But also always new and forward.
But there is more. We wanted to make something special. We added an extra CD, with some historical recordings, including Getatchew and the Instant Composers Pool (ICP), Haile Selassie 1 Theatre Orchestra (1960!) and a live performance with The Ex in Montreal. Plus a 40-page booklet with great photos by many photographers. Matias Corral specially came to Addis to shoot some Getatchew portraits in addition to his already striking black + white live photos. We decided to make this a benefit CD for Getatchew. Everyone contributed for free. After almost 65 years of playing music, we thought this amazing person deserves some kind of pension!
This new vinyl version comes as a double LP on 180 gram vinyl with a 48-page photobook.
The first time we met Getatchew was early 2004. We were intrigued by his music which we knew from an old cassette. What an original sound! We went to Addis to find him. Getatchew agreed right away to come to Holland for our 25th anniversary party in Amsterdam in November 2004. He played with the ICP and he loved it, but he was also intrigued by The Ex and wanted to play and record with us. We invited some great horn players and things have never stopped since. We recorded the “Moa Anbessa” CD and in some eight years we've done almost a hundred concerts in 15 countries; jazz, world music and rock festivals, and venues all over the world. Lincoln Centre Out of Doors in New York, the French 8 o'clock news with 8 million viewers, Rio Loco in Toulouse to 20.000 people and broadcasted on TV in Ethiopia.

15,16 and 17. Recorded in the Sala Rossa, Montreal, d.d. 14&16-09-2009. The Ex: Terrie, Andy, Katherina and Arnold - Vocals. Guests: Xavier, Joost, Broodie and Joe Williamson - Bass.
Lale Guma and Yaf Zemed Mech Teffa are both based on songs by Ayalew Mesfin and the Fetan (Speed) Band. Yaf Zemed Mech Teffa is meaning something like: 'there is a lot of superficial people'; 'talking behind your back'. The next of 7 (From Hinge Perspective) was written by Arnold (The Ex). Lale Guma is from Wollo, about stick-fighting between groups of youth from neighboring countryside villages. Arragement: Getatchew Mekuria & The Ex & Friends.

18. Recorded june 2011 in Witte Villa, Wormer. Getatchew giving an example of a song we could record.

The Ex started playing in 1979. Using guitars, bass, drums and voice as their starting point The Ex have continued to musically explore undiscovered areas right up to the present day: collaborations with jazz musicians and an Iraqi-Kurdish band, Kamagurka, Tom Cora, Sonic Youth, Han Bennink, Jan Mulder, Shellac and Wolter Wierbos. In 2002 The Ex set up a lively musical exchange with Ethiopia. ... more

Bandcamp Daily  your guide to the world of Bandcamp

sndtrak stops by with an Album of the Day Feature of his most recent release, FLIPS V1: Triple Lindy